To formulate a comprehensive multi-sectoral development plan aligned to the thrust of the administration and provide technical assistance to the governor in carrying out measures to ensure the delivery of basic services to the community. Being part of the technical working group of the Provincial Development Council, the Provincial Planning and development office expertise and technical support shall assist the Sanggunian in setting direction of economic and social development and coordinating development efforts within the territorial jurisdiction pursuant to RA 7160 section 106.

The Provincial Planning and Development Office (PPDO) envision to be the center in providing dynamic blueprint of development aligned to the long-term vision of the province as an Agri-industrialized commercial and eco-tourism province committed to attain a sustainable development being responsive to the demands of the constituents towards genuine hopes and aspirations for the people of Davao Del Sur.

Takes responsibility to become an effective workforce of the provincial government in the achievement of the province’s thrusts and goals by establishing a well-coordinated plans, projects and programs in all aspects of development.

The PPDO is dedicated to influence development partners in achieving results-oriented and people participated development planning process and to formulate policy-based integrated and comprehensive development plans with the highest degree of excellence and teamwork.

The Department of Budget and Management has released P120 million to the Provincial Government of Davao del Sur as Support to Barangay Development Program (SBDP). The Barangay Development Program is a flagship program of the National Task Force  to End Local Communist Armed Conflict (NFT-ELCAC), as a whole-of-nation approach to end insurgency. The program aims to grant incentives to supposedly cleared barangays in the amount of P20 million. This incentive is intended to fund various development projects in the barangays, such as farm-to-market roads, school buildings, water system and livelihood projects.

Eight cleared barangays in the province have received P20 million each to fund their respective projects, namely: Balabag and Goma in Digos City,  Saliducon in Sta. Cruz, Sibayan, Darapuay and Managa in Bansalan, and Asbang and Colonsabac in Matanao. The incentives allocated to Barangay Balabag and Goma amounting to P40 million have been directly released to the City Government of Digos. A total of 29 projects were identified and approved by the NTF-ELCAC for implementation.

On September 27, 2021, during the regular Monday convocation of the Provincial Government of Davao del Sur, P78,650 – worth of materials for the waterworks projects of the province was turned-over to different barangays. Governor Marc Douglas IV C. Cagas led the turning-over of P.E. pipes in assorted sizes to the following barangays, namely: Matti, Soong, Binaton in Digos City and New Katipunan in Matanao. The provincial government has continuously reached out particularly to remote barangays to improve their water supply, and as a consequence improve their health and sanitation. Water supply and sanitation are essential part of the development of a community. 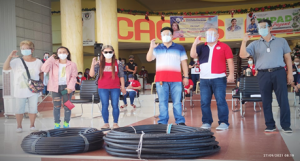 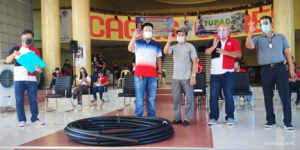 The CY 2022 AIP, which is the work and financial plan of the province, contains various projects, programs and activities wherein the Office Appropriations which includes the employees’ salaries receiving the lion’s share.

Two other expenditures receiving the bulk of the budget are the Programs/Projects under the General Fund and the 20% LGDF. For the LGDF – General Fund, it is divided into the following components, namely: General Public Administration; Social Sector/Services; Economic Sector/Services Including Infrastructure. The 20% LGDF is composed of appropriations for loan amortization and various projects/programs which are mostly infrastructure. An amount of P177,450,000.00 is allocated for infrastructure projects under the 20% LGDF – Regular Fund, while P79,000,000.00 is allocated under 20% LGDF – Public Order and Public Safety (POPS). Infrastructure projects funded under the POPS are intended for Geographically Isolated and Disadvantaged Areas (GIDAs) and are included in the POPS Plan which was approved by the Provincial Peace and Order Council (PPOC) on September 14, 2021.

The budget for the CY 2022 AIP will be sourced from the National Tax Allotment (formerly Internal Revenue Allotment) which provides the biggest source, real property tax, economic enterprise, share from national wealth and other local taxes.

At the end of the meeting, Governor Cagas thanked the PDC members for approving CY 2022 AIP since it signifies further development for the province and improvement of the lives of its constituents. 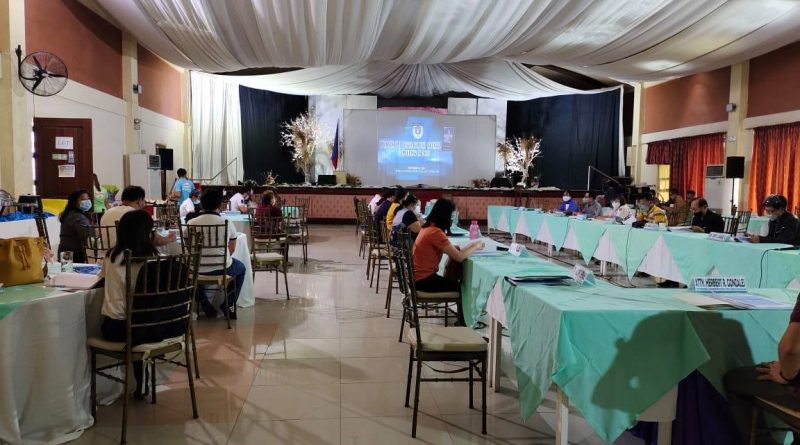 In these trying times, nothing can stop DAVAO DEL SUR provincial government’s relentless efforts for the development of the Province. It will ensure to work towards economic growth and competence, adaptive and a thriving community. Our pro-active and young Governor, Hon. Marc Douglas IV Chan Cagas, is bent to pursue persistently, the Development Agenda; that is, to make Davao del Sur an Agri-Industrialized, Commercial, Eco-Tourism and Risk Resilient Province.

With the aim of improving the lives of its constituents the Provincial Government of Davao del Sur has partnered with national agencies in attaining the same.

One major project in the province being implemented and supervised by the Provincial Planning and Development Office (PPDO), in coordination with the Philippine Rural Development Program (PRDP), is the Rehabilitation of Waterfall-Osmeña Farm to Market Road (FMR) with PSCG Bridge (Package 1 & Package 2). Package 1, 7.560 kms with a project cost of PhP134,489,870.08 and with physical target of 7.20 kms, inclusive of bridge, is close to completion with a 77.80% completion status, having started last December 11, 2019. 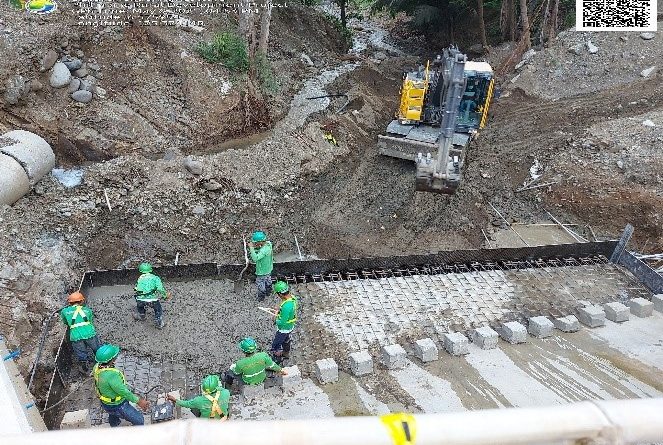 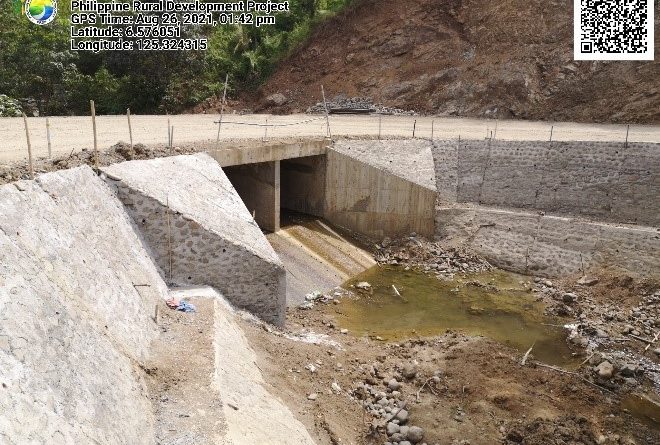 Serving its purpose, the majority of the population in the area has already started using part of the finished road length. Residents have expressed their gratitude as the project provided them with ease in their daily travel and transport of agricultural produce and various goods. 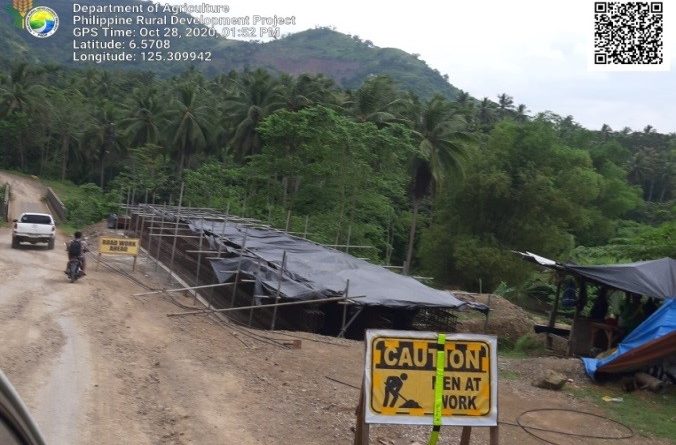 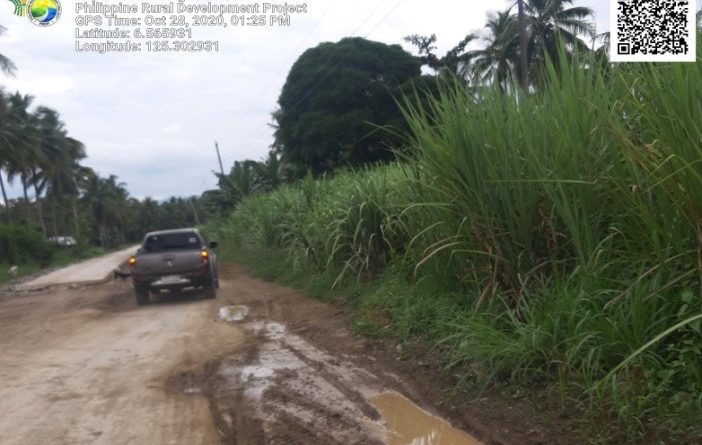