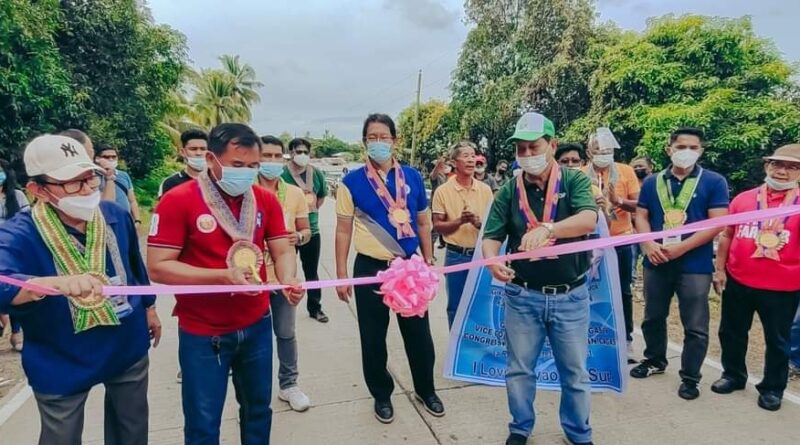 The Department of Agriculture (DA) has finally turned over a multi-million project to the Davao del Sur Provincial Government: the rehabilitation of Barangay San Isidro to Sinayawan, Poblacion, Sacub, and Lanuro in Hagonoy to Barangay Cabligan, Matanao, Davao del Sur.
The Department of Agriculture (DA) completed a 14.32-kilometer road concreting project under the Philippine Rural Development Program (PRDP). Project Development Officer III Engr. Gina Chua said that the project with a total amount of P173,567,342.40 was funded through a collaboration with the World Bank (WB), DA, and PLGU Davao del Sur where 80 percent of its loan is from WB, 10 percent from DA, and 10 percent from the provincial government which is at P17,356,734.20. Fifty-two (52) hand tools, including a shovel, brush cutter, wheelbarrow, rakes, and jungle bolo, were also turned over by the DA.
Present during the activity were Governor Douglas Cagas, Vice Gov. Marc Cagas, DA Representative Engr. Marc Badungan, Board Member Atty. Carmelo Delos Cientos III, Matanao Vice Mayor Albert Panerio, Hagonoy Mayor Franco Magno Calida, Vice Mayor Dr. Alexis Nonoy Paden with their councilors Dante Asnar and Fritz Surposa. There were also barangay captains from 5 barangays who have benefited from the said project.
Engr. Badungan, on behalf of RD Engr. Ricardo Oñate Jr. thanked Governor Cagas and said that they were the instrument used by our Father God to make the project possible. He informed the public that under the Cagas Administration, the provincial government has P700 million worth of approved projects from their department and has more than P200 million worth of projects awaiting for approval.
Governor Cagas expressed his happiness at the project’s completion and commended Congresswoman Mercedes Cagas for her efforts in allocating funds to the Department of Agriculture.
The governor, on the other hand, announced the arrival of 2,000 vaccine vials, explained the significance of vaccination, and urged citizens to ensure public safety by following the minimum public health protocols.
Vice Governor Cagas also said that the trials that were faced by the province such as drought, powerful earthquakes, and the COVID-19, have placed the government finances in a crisis. Despite these difficulties, they handled wisely the provincial treasury and continue to implement many programs.
Lanuro Barangay Captain Jenyf Jun Taeza expressed his gratitude to the PRDP staff and the Provincial Government of Davao del Sur through Governor Cagas for concreting their road as the representative of the five barangays that benefited from the project. He said that their road has finally been concreted after nearly 70 years since the barangay was created.
(PIO|MarizDane)